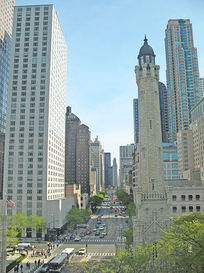 The Near North Side is one of 77 well-defined community areas of Chicago, Illinois, United States. It is located north and east of the Chicago River, just north of the central business district (the Loop). To its east is Lake Michigan and its northern boundary is the 19th-century city limit of Chicago, North Avenue. With the exception of Goose Island and Cabrini–Green on the west, the Near North Side is known for its extreme affluence, typified by the Magnificent Mile and the Gold Coast. Navy Pier, a popular visitor destination, is also here.

McCormicksville, in the vicinity of Rush and Erie Street is so named because it is here where many branches of the famous McCormick family of reaper fame built their mansions.

In the 1780s, in what is now the Near North Side, on the northern banks of the Chicago River near today’s Michigan Avenue Bridge, Jean Baptiste Point du Sable built the first known permanent settlement in “Eschecagou.” Today this is marked by Pioneer Court.