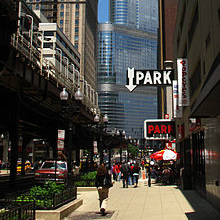 The Chicago Loop is one of 77 officially designated community areas located in the City of Chicago, Illinois, United States. It is the historic commercial center of Downtown Chicago. It is the seat of government for Chicago and Cook County, as well as the historic theater and shopping district (including State Street).

As established in social research done by the University of Chicago in the 1920s, the Loop is a defined community area of Chicago. Chicago’s central business district community area is bounded on the west and north by the Chicago River, on the east by Lake Michigan, and on the south by Roosevelt Road, although the commercial core has expanded into adjacent community areas.

The community area includes Grant Park and one of the largest art museums in the United States, the Art Institute of Chicago. Other major cultural institutions that call this area home include the Chicago Symphony Orchestra, the Lyric Opera of Chicago, the Goodman Theatre, the Joffrey Ballet, the central public Harold Washington Library, and the Chicago Cultural Center.